We had a wonderful visit to the St Chad's on Thursday. Here is what Lily said about the visit.

' St Chad's is the mother Church of the Catholic Archdiocese of Birmingham. It was a peaceful place and I really enjoyed going. It is a place to worship and pray, a place to meet God, Mary and our beloved Jesus.' 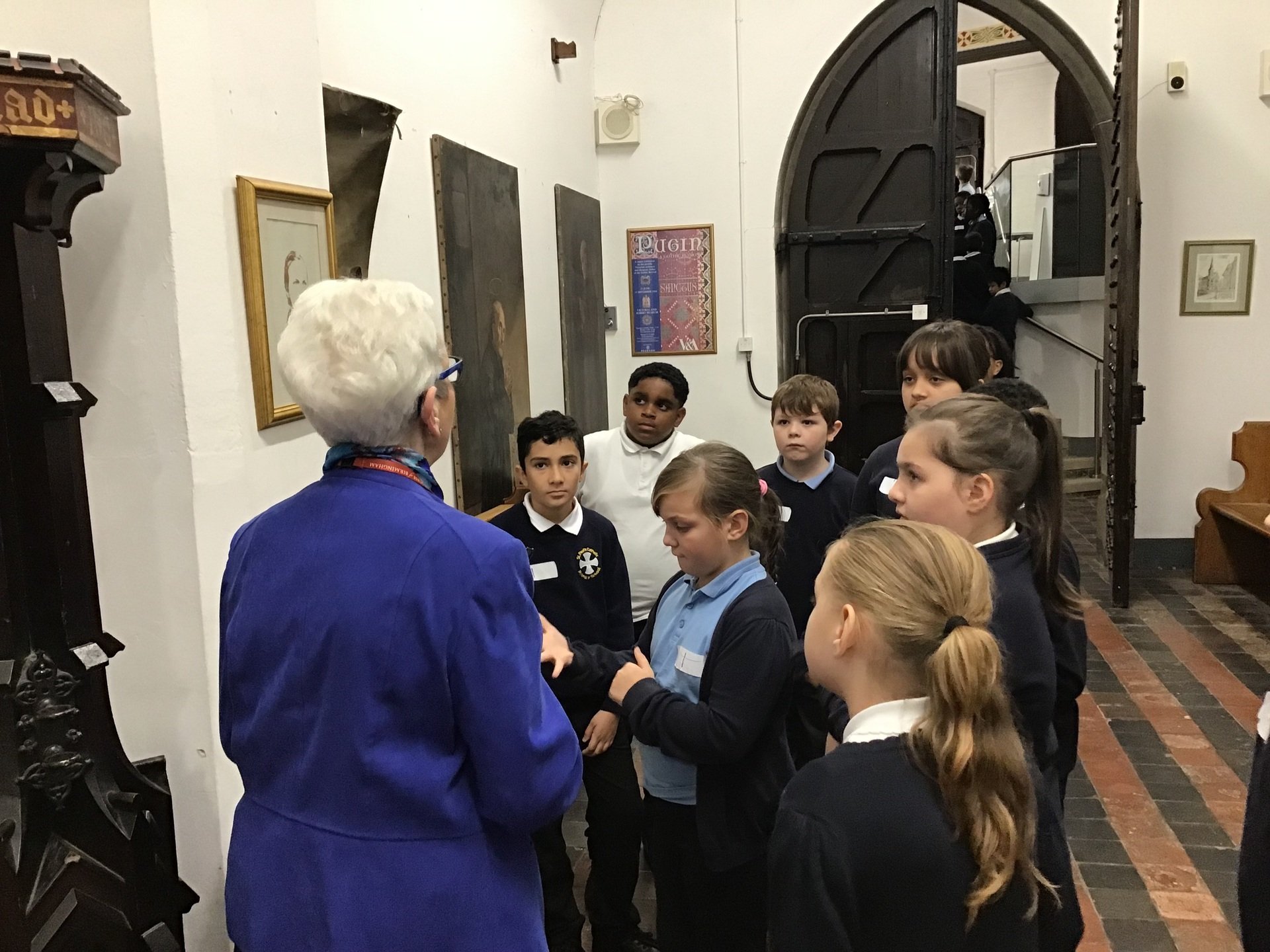 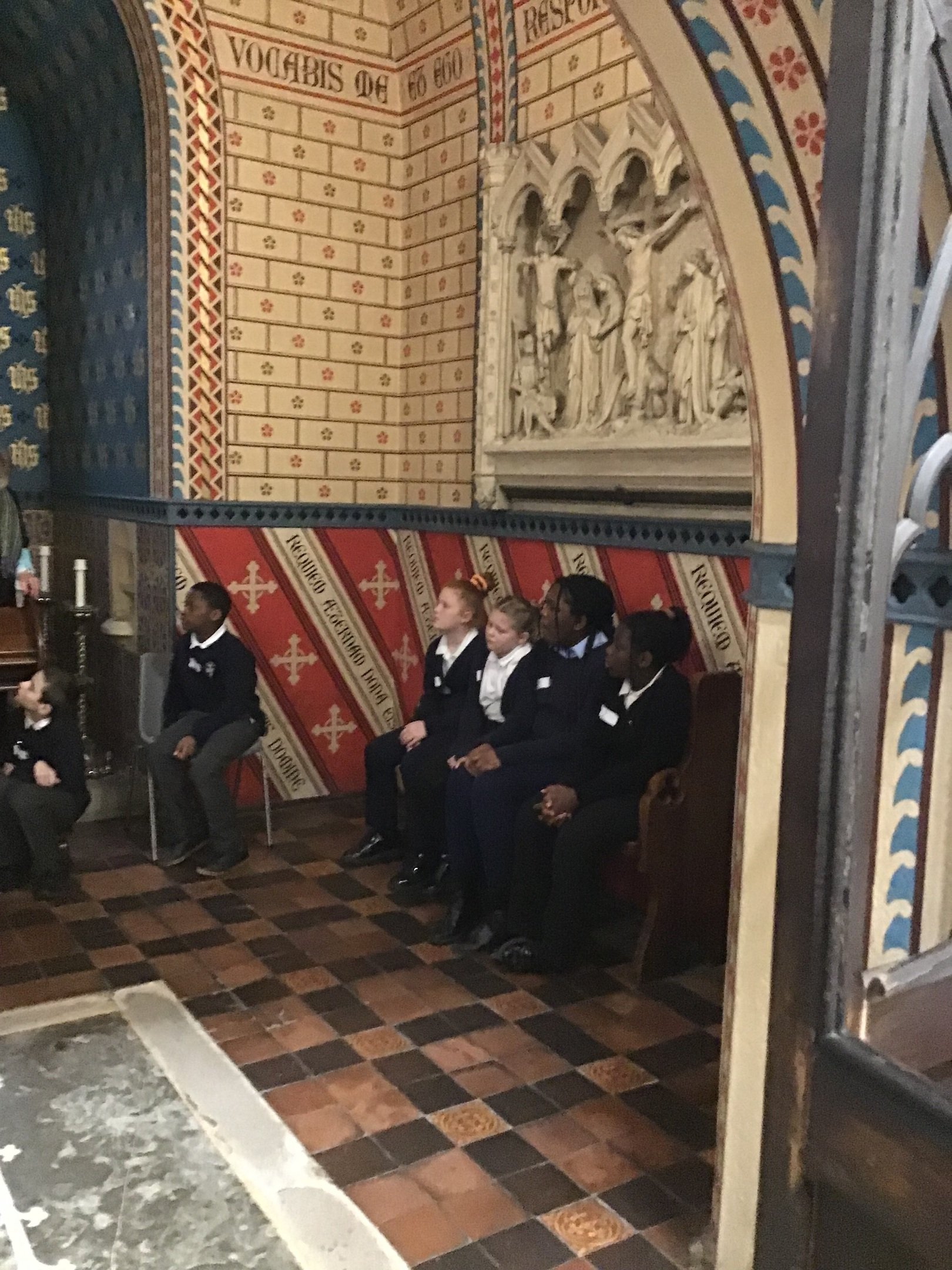 The Man who changed the World Exhibition 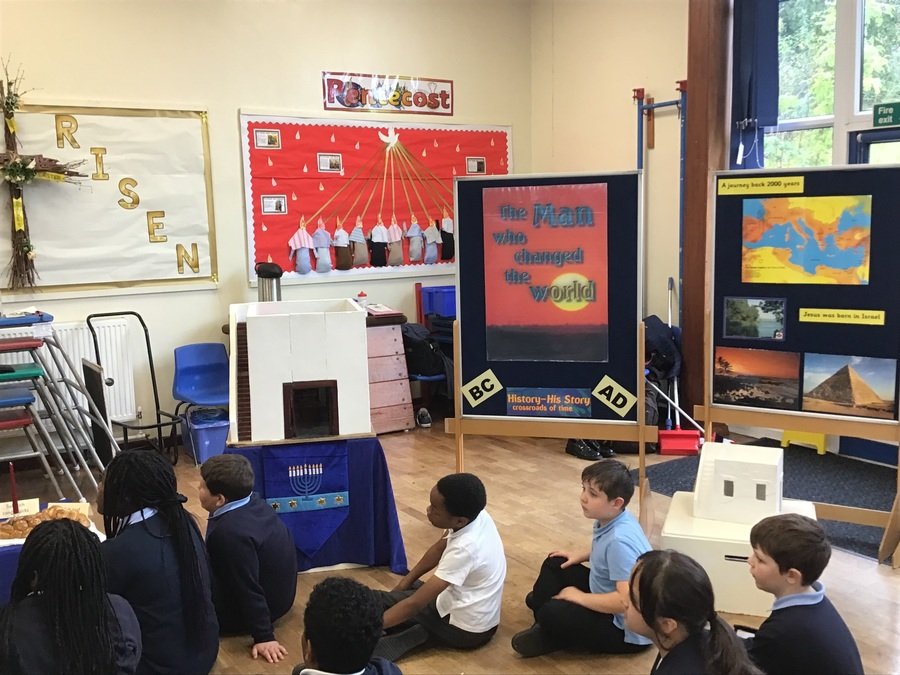 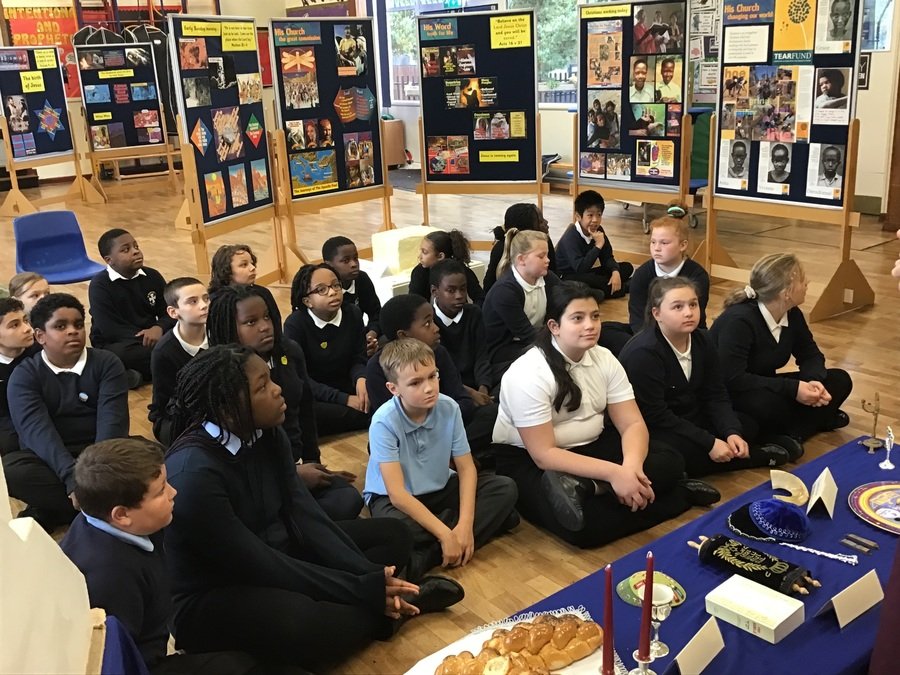 It was wonderful to welcome Francis and his friends from Kings Norton Baptist Church today. Year 6 had the opportunity to learn about the life of Jesus, and what it was like for him growing up in Palestine 2000 years ago. We shared our thoughts about the many parables that Jesus told us, and the importance of the message within these parables.

It was wonderful to have so many parents attend our maths workshop today. The children worked with their parents and used concrete materials to solve place value problems.

The aim of the workshop was for the parents to understand how we teach maths at St Paul’s. We began with our retrieval practice questions and then moved onto our lesson objective which was to order numbers. We worked together to solve some of the questions and then the children worked with their parents to solve more challenging problems.

We will be offering more maths workshops for our year 6 parents and pupils in the new year.

Thank you to all the parents who attended, and we look forward to future workshops. 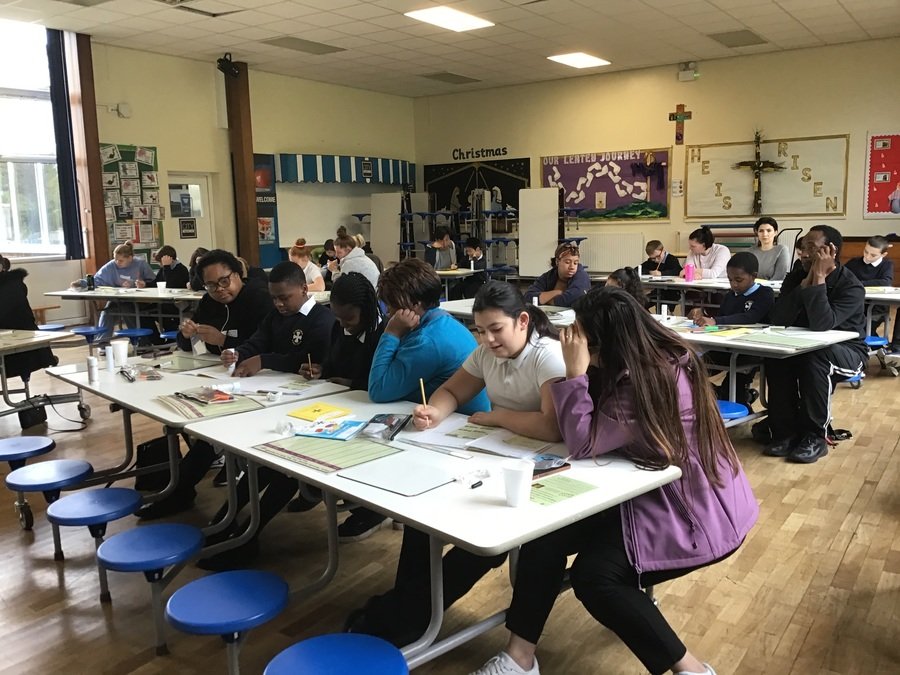 It was great to welcome Sandra from HSBC bank this week, she visited each class and spoke about the importance of money in our lives. Sandra shared the story of ‘ Fairer Tales’ with Reception class and discussed where money comes from with Year 1.

In year 2 she told the story of  ‘ Ed and Bunny Earn Some Money,’ and  discussed budgeting with Year 3. Sandra spoke about Gaming in Year 4 and how it can get people into a lot of debt. The children were alarmed to hear that some people spend up to 10 hours Gaming each day!

In years 5 and 6 we learned about the World of Work and the jobs we would like to do in the future. Here are some of the jobs the children chose - Basketball player, Interior Designer, Surgeon, Vet, Teacher, Midwife and Historian. Sandra advised the children to choose a job they will enjoy and that when we earn money, we can make more choices about our future.

Today Year 6 took part in a Mini First Aid for Kids course. During the session, the children learned how to manage choking, burns, bleeding, breaks and bumps. They also learned how to administer CPR and the Heimlich maneuver. 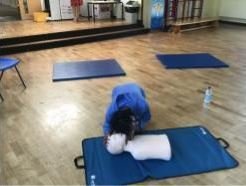 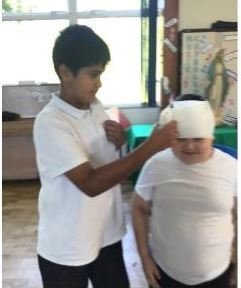 Mass for Peace and Prosperity for Lebanon

On Sunday the 19th of June, four Year 6 children took part in a Mass for Lebanon at St Paul’s Chapel, Vernon Road, Edgbaston. We listened to the priest who said the mass in both English and Aramaic and we read bidding prayers. Most of the congregation who attended were from Lebanon, Syria or Iraq.

There were also pupils from St Paul’s Girls School in Edgbaston who spoke about their links with Lebanon. One of our Year 6 children also spoke about our Geography curriculum and how we have been learning about Beirut.

It was a very special celebration, and it was lovely to share it with the Lebanese people. 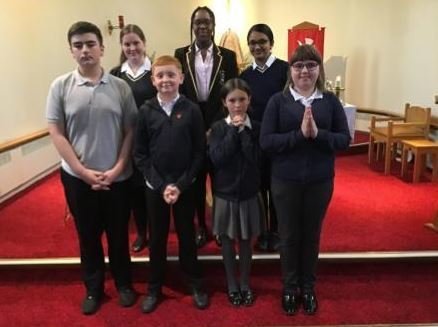 On Monday the 27th of June, ten children from year 6 took part in an orienteering competition at Cannon Hill Park. We were very lucky to have the sun on our side and the children had a wonderful time running around the park. We split up into two teams of five and the aim was to find ten symbols which were scattered around a section of the park. St Paul’s found nine of the symbols and came second. Well done everyone! 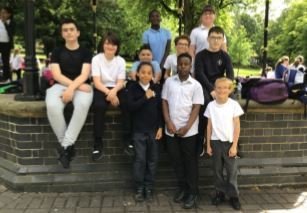 On Thursday the 30th June, ten children from year 6 took part in a rounders competition at Newman University. The children played against five other schools, and we won! Thank you to all the children who displayed such resilience and determination. Teagan was chosen by the umpires as she displayed such skill when fielding – well done Teagan!

A big thank you to Miss Grinnell, Mrs Hatton and Mrs Craddock for preparing the children.

For Refugee Week 2022, Year 6 were asked to paint some skittles to be installed at a privately-run art gallery in the Jewellery Quarter. As a School of Sanctuary, we are already familiar with the plight of refugees. We also know about the tragic events in Ukraine and sadly, we are becoming aware of the meaning of war. At St Pauls, we will always give a warm and loving welcome to children coming from dreadful situations.

Years 3,4,5 and 6 had a wonderful afternoon yesterday at Tudor Grange Stadium, Solihull. Each child took part in the throw, high jump, long jump and 100m and everyone gave their best.  Miss Lay, who organises the sporting events for the Lumen Christi Academy, praised the children for their resilience, enthusiasm, and behaviour. Well done Key Stage 2!

Year 6 had a fantastic day today celebrating the Queen's Jubilee. We began the day with an assembly, and it was wonderful to see all the children dressed in red, white and blue. Returning to class, we made a key ring using red, white and blue wool and some of the children made one for their family member. After break, we made a collage of the Queen's head and had scones with cream and jam.

At lunchtime, we had a really special packed lunch in a Union Jack lunch box!

In the afternoon, Gaby, the dance teacher, taught us a Britney Spears dance; she was really impressed with Year 6s moves.

We had a really special day and we sent a card to Her Majesty the Queen.

Year 6 visit to meet the chicks in Reception 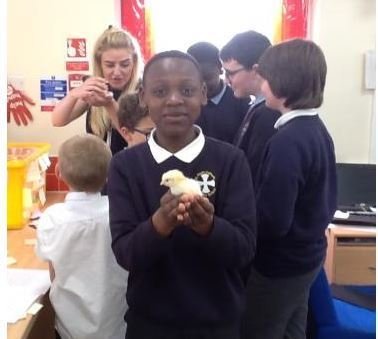 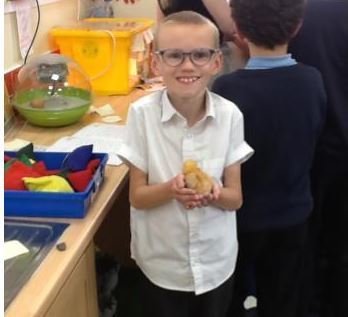 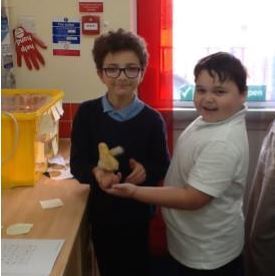 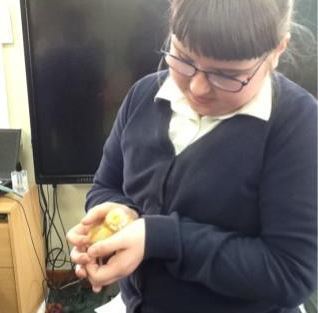 Last Friday, Miss Concannon and Reception class invited year 6 to look at the newly hatched chicks ; they were beautiful!

Miss Concannon explained that the yellow chicks were female, and the brown chicks were male, some of the chicks even fell asleep when they were being held.

It was wonderful to see so many parents ( and grandparents ), attend our year 6 maths challenge workshop. We used this opportunity to complete some algebra activities, and then we focussed on some Year 7 algebra where the children had to simplify expressions.

A huge thank you to all the children who demonstrated excellent problem solving skills.

The whole school celebrated Amazing Africa Day on Friday the 1st of April, and it really was amazing!. Year 6 focussed on the' Democratic of Congo' and we were so lucky to have some of our parents share their experiences about the country hey are from.

Eugene's mum spoke about growing up in Ghana,and the children asked her lots of questions about school. Mum told us that they had to respect their teachers or they would be punished. Godwin's mum told us about all the lovely beaches in the Congo and how she misses the sunshine. She even brought some photos of Godwin and his siblings when they visited the Congo; Godwin shared these with the class.

Thank you so much to all our parents for sharing their memories about the Congo and Ghana.

On Thursday 17th February, Year 6 took part in a STEM ( Science, Technology, Engineering and Maths ) event supported by The Royal Air Force. The aim of the project was to design, create, test and improve three prototype gliders.

By the end of the challenge, the children were able to identify different forces acting on the glider and gain an understanding of how gliders and other aircrafts take flight. 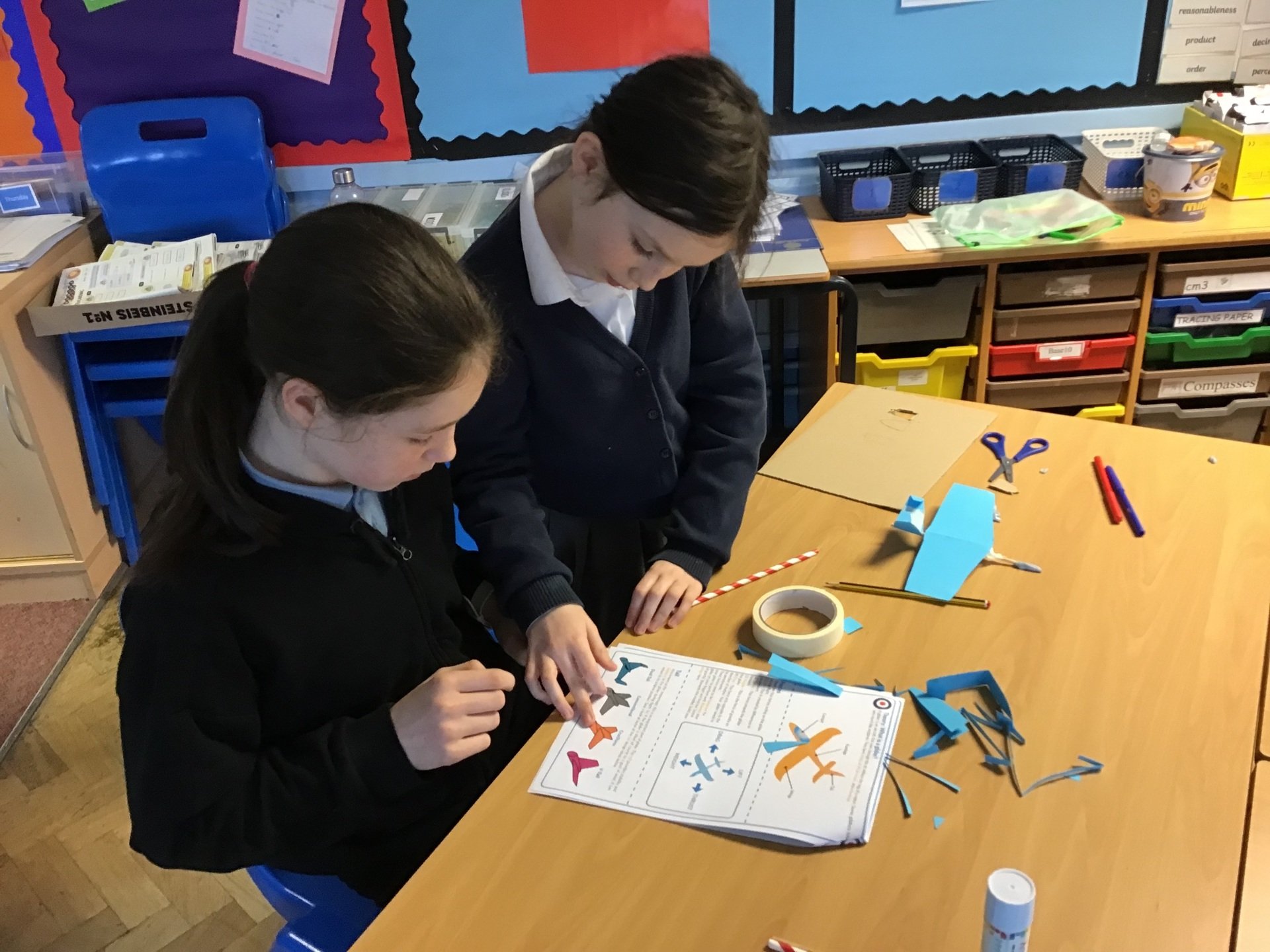 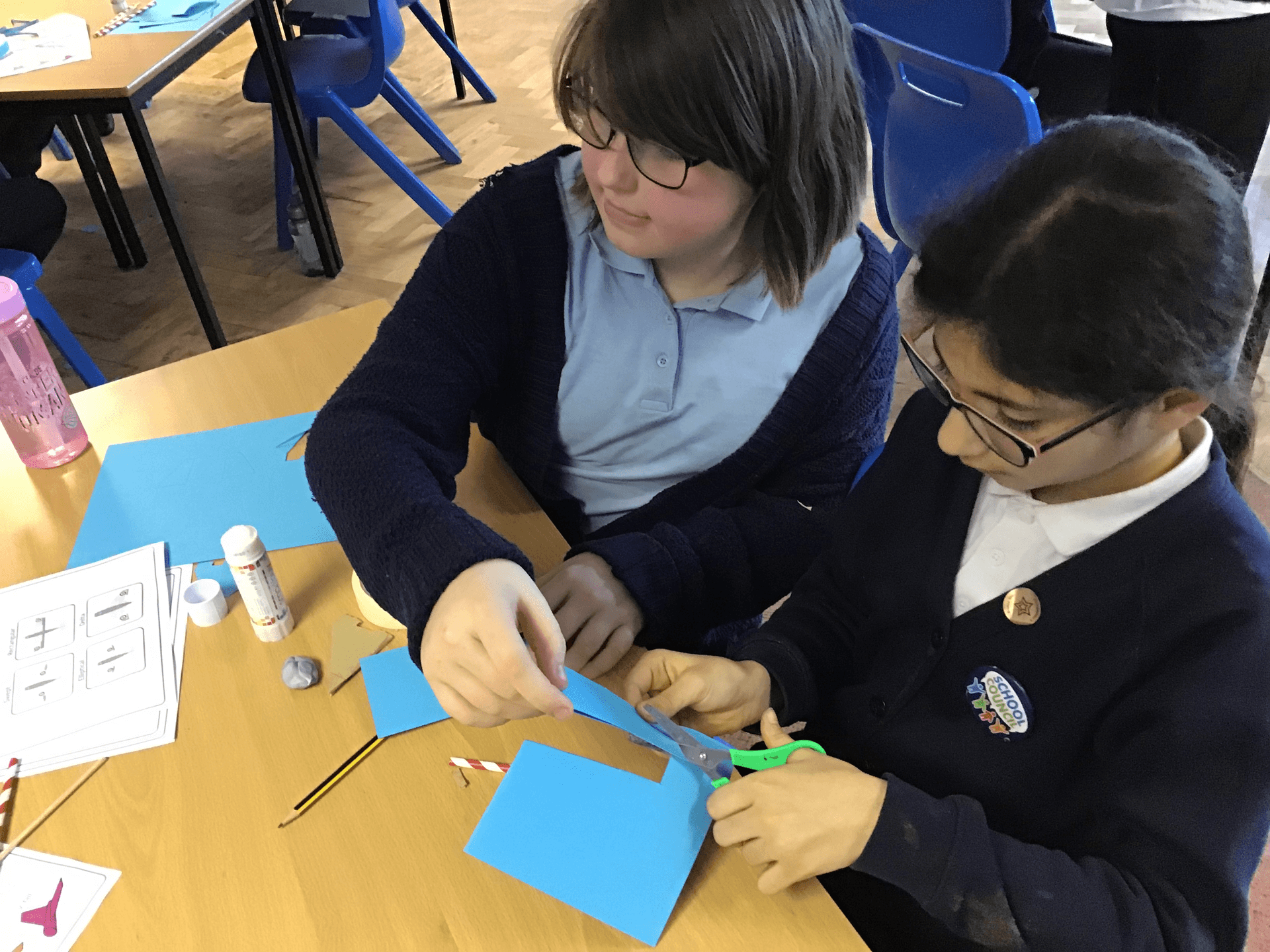 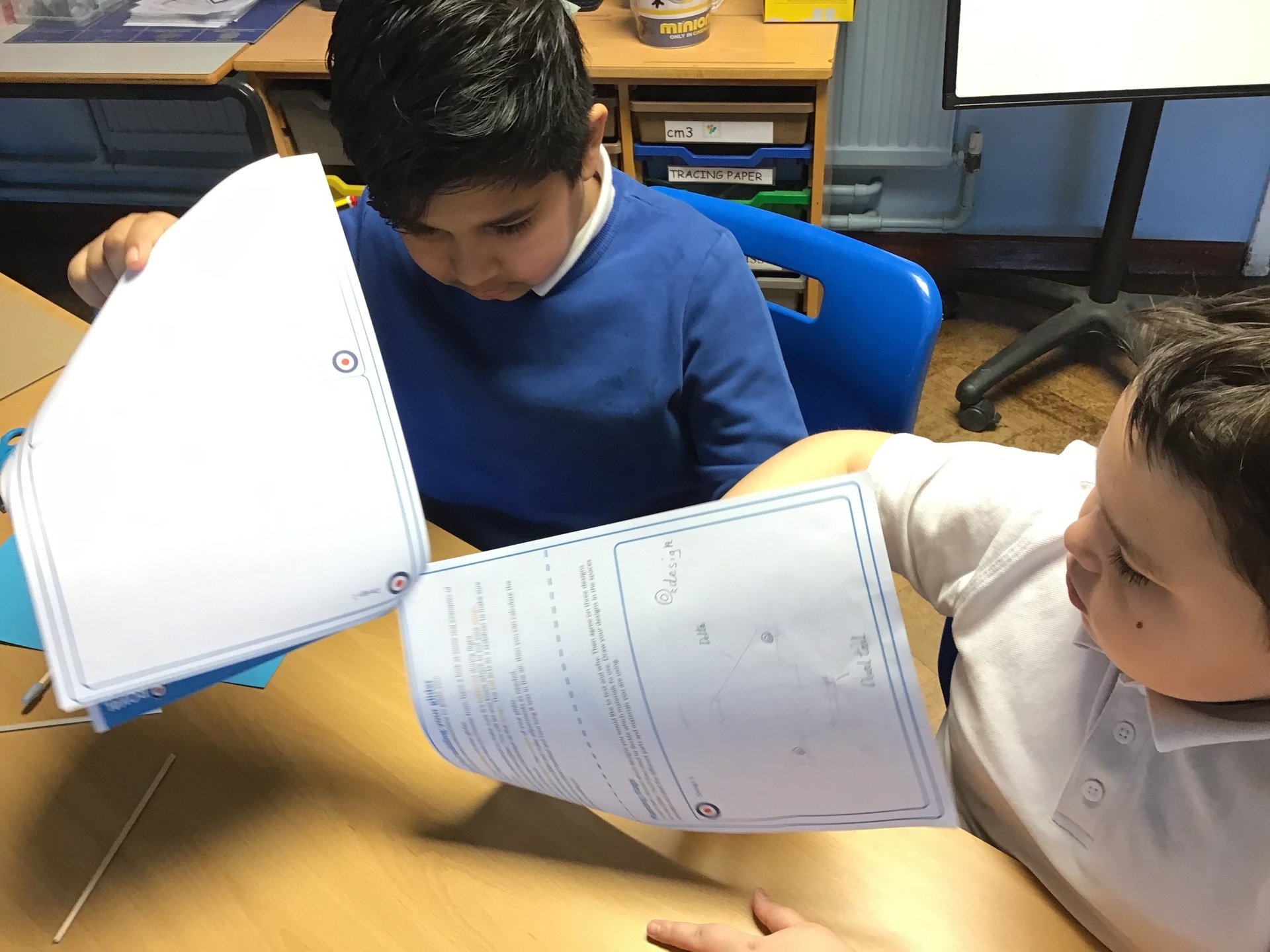 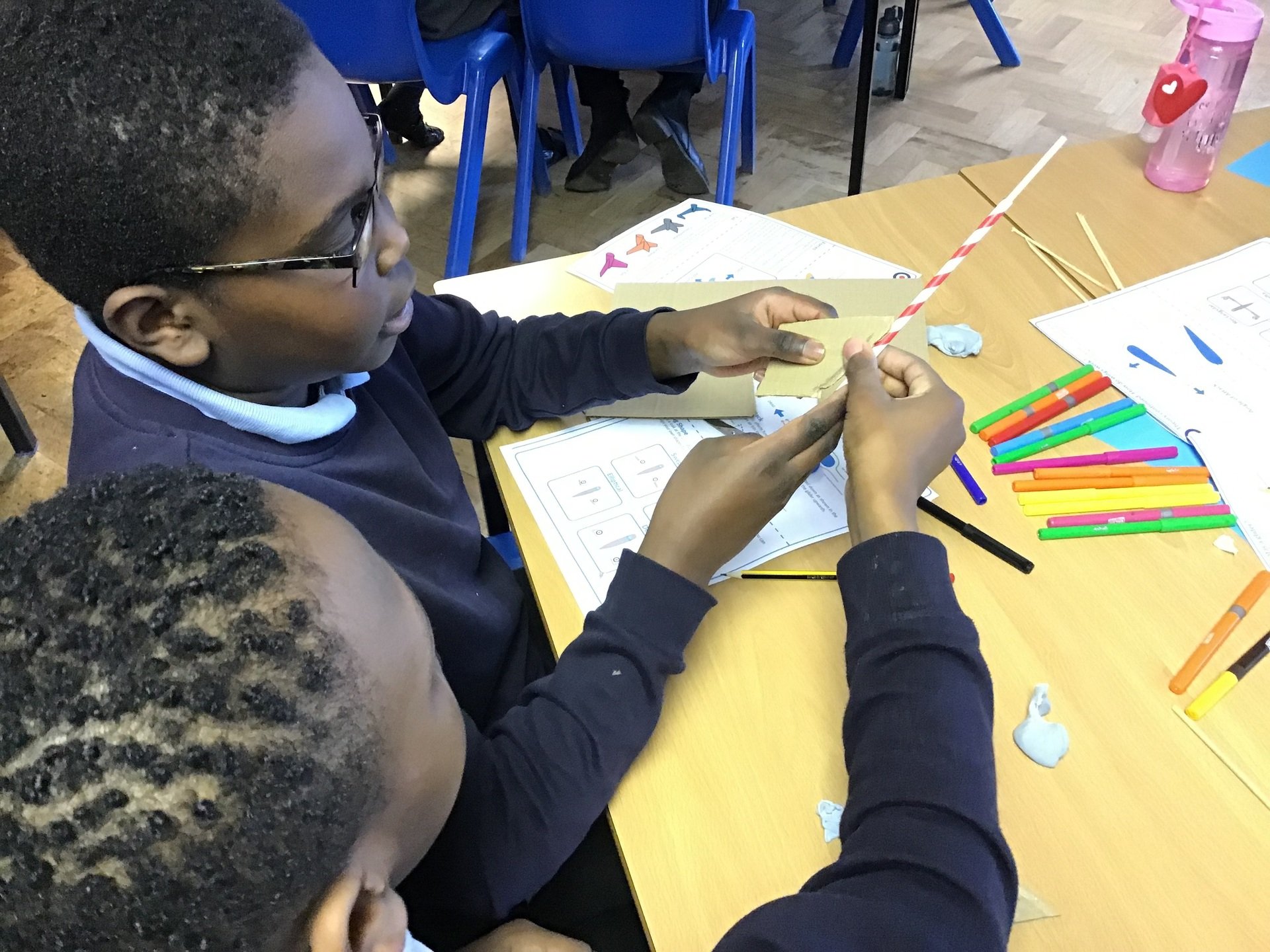 Today we welcomed our parents to take part in our arithmetic and times tables workshop. It was an opportunity for the children to share their arithmetic knowledge and to complete a paper with their parent. We went over some of the strategies, and how important it is to show our working. After the paper, we then completed 120 times tables questions in less than 5 minutes; I think the mums and dads were very impressed.

Thank you for coming to our workshop and I look forward to the next one.

This morning, we held a reading workshop for our Year 6 parents and it was wonderful that so many of our parents.

The workshop allowed our parents to understand how we teach reading comprehension at St Paul's, and take part in a lesson with their child. The parents had the opportunity to learn about the reading domains and how important these are to being a successful reader.

Thank you to all our parents and children for working so hard during the lesson.

It was such a prayerful and reflective day when we had the opportunity to think about the importance of the birth of Jesus. 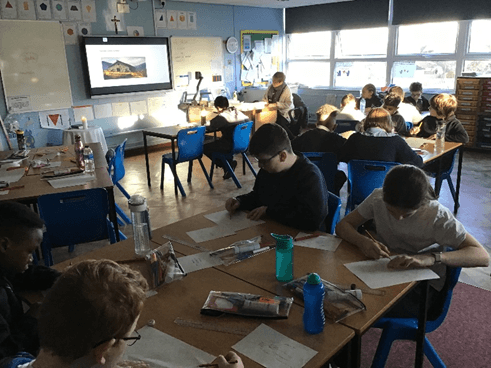 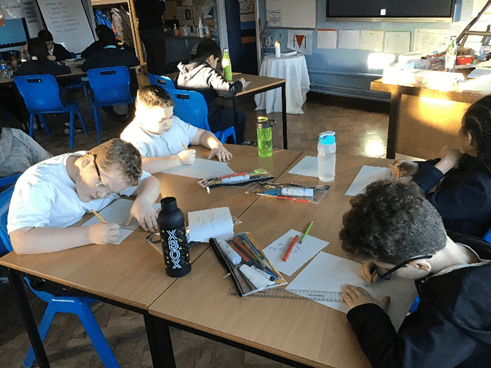 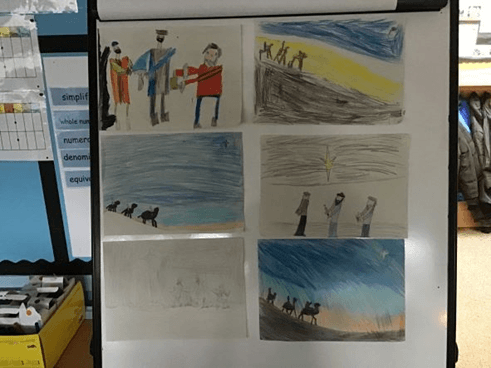 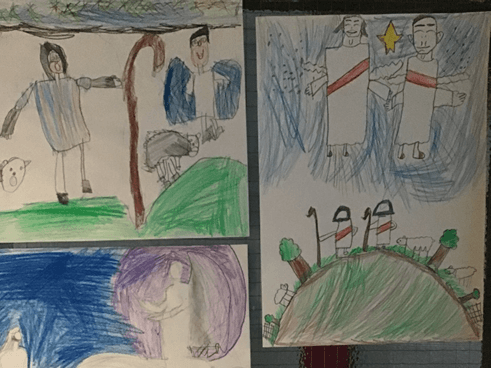 On Tuesday 19th October, members from BRAVE ( Building Resilience Against Violence and Extremism ) visited St Paul’s to speak to our year 5 and 6 pupils about gangs and extremism. The provider began by asking - What makes a good citizen?

During the day the pupils found out that a gang can be three or more people engaged in criminal activity. The pupils learned how gangs groom young people to carry out crimes and we discussed ways to prevent this.

We also learned about that extremist groups target young people online and we discussed ways to keep safe online. The pupils could identify three people they could speak to if they were worried about gangs, extremism or online safety.

We ended the session with reminding ourselves what a good citizen is, and that we shouldn’t be half-hearted when faced with gangs or extremists, we should be fearless and say No!

Here are some quotes from the Year 6 children

' I learnt that you should never join a gang no matter what. Even if they say you need to don't. If you know about it and you didn't report it, you are part of it.'

' I learned that even a little favour can get you in a lot of trouble. I also know not to share private information and always tell someone what has happened.'

' I learned that gangs like to target and trap people into doing their bidding. They lure people in and make people do things that get them into a lot of trouble.'

' Gangs have 3 or more people in them and do criminal activity. They can easily manipulate you to join their gang by buying you what you really want with 'their' money. Extremists are people who take things too far.'

' A gang is not about looks, it can be people of any age.'

' Anyone could be in a gang and try to take advantage of you to transport drugs or weapons and you need to question everything.'

' I learned that people in gangs don't have a specific look so be careful. I also learned that young children are very vulnerable.'