23rd January 2023
The children wrote cards for people who are homeless.

16th January 2023
The children gathered all of their donations and sorted them into piles. 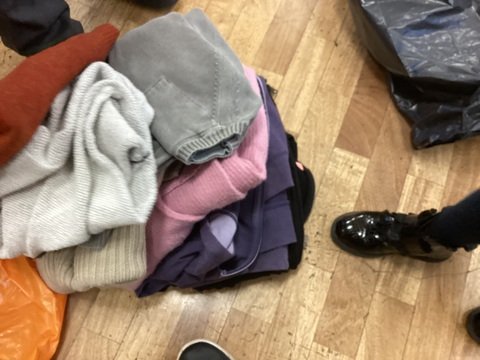 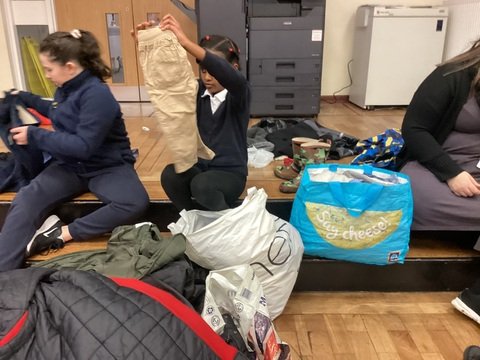 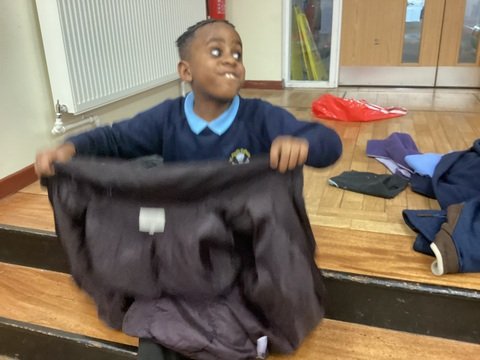 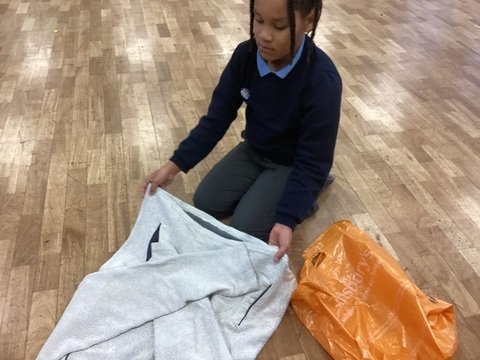 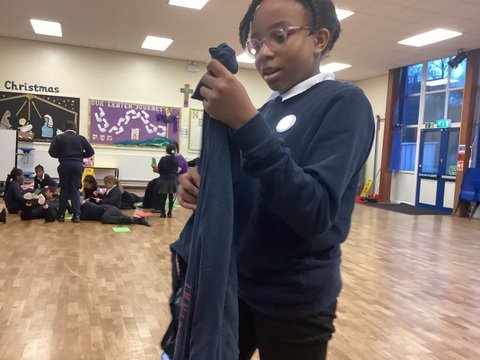 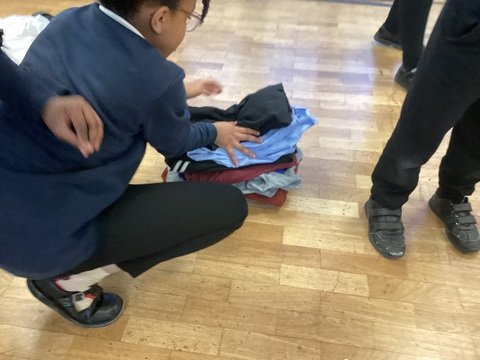 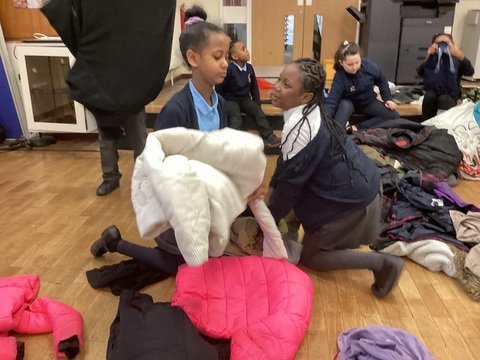 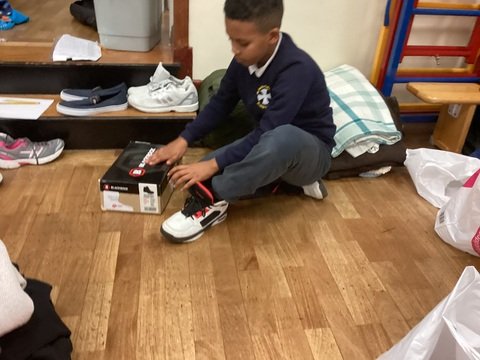 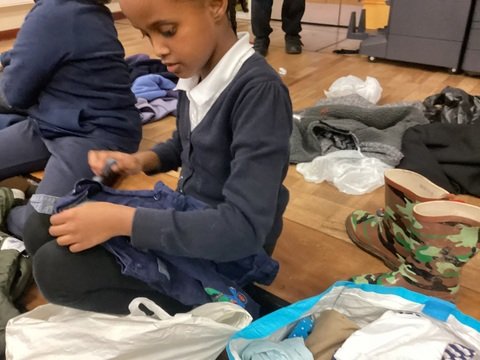 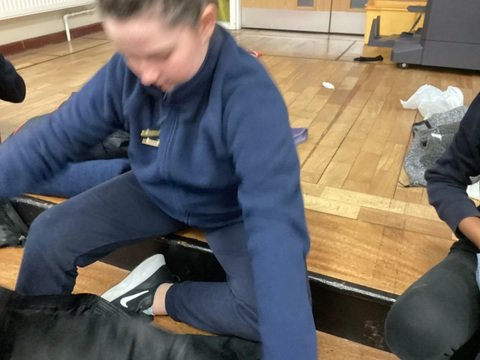 We led an assembly on Mary's meals to the whole school.
Children went back to their classes for a fun afternoon.

12th December 2022.
We had a Mini Vinnie party to celebrate all of our hard work. We had sweets, crisps and squash and danced together.

5th December 2022
We played look up, look down.
We all finished the cards for the homeless. A group of children made a presentation on Mary's meals. 2 children from each class picked activities for their class.

The homeless focus group focused on collecting the donations and making cards to go in the packs.

The Mary's Meals group designed the day and  made posters to start advertising it.

Monday 7th November 2022
We started again by playing Wizards, giants and elves. It was very close at one point but Mrs Pugh's team were victorious again, 3/2.
The homeless group finished their posters ready to be put up around the school. They decided who would read their messages to the rest of the classes.
The Mary's meals group wrote more detailed plans for the day. Three children wrote a message to give to Mrs Damms. The others started to think of ideas for the day some craft and cooking ideas.

Monday 31st October 2022
We played wizards, giants and elves. Mrs Pugh's team won 4/5.
The homeless continued to make posters and wrote a message to read to the classes.
The Mary's meals group confirmed some ideas for the fun day.

Monday 17th October 2022
We sang some songs.
Then we split into two groups. A group designing posters to collect things for the homeless. The other group discussed ideas for the Christmas fun day.

Monday 10th October 2022
We started by playing the "the sun shines on."
Then we split into our groups and continued on our work from last week.
Harvest group finished their posters and wrote something to say to the classes.
The homeless group finished their posters.
Mary's meals group started to consider ideas for the classrooms and the hall for their Mary's Meals day.

Monday 3rd October 2022
We sang "We're singing in the rain." Then we split into three groups, a harvest group, a homeless group and a Mary's meals group.
The Harvest group worked on making posters for the school, they are also going to help collect donations in and speak to classes.
The Homeless group, discussed what they should collect in for the homeless and started making posters for the classes.
The Mary's meals group came up with some ideas to raise money for Marys meals through December.

Monday 26th September 2022
There were a total of 42 children who started at Mini Vinnies ranging from year 3-6.
We played some ice breaker games to get to know each other.

The Mini Vinnies have been meeting since September 2021 every Monday after school from 3:30-4:30. The first few weeks we considered the needs of the world. Since then we have picked a need to focus on each term.

The children decided to focus on raising money for Mary's Meals. Firstly they looked into Mary's Meals and what they do. We found out that they give the children in different countries around the world a meal at school. This ensures that the children have a meal and that they go to school.
The children decided that they were going to plan a Mary's Meal retreat day. We decided that the 29th June would be prefect as our feast day too. The children planned every part of the whole day.
The children could wear  white and blue and could donate £1. They started with a assembly that they wrote and led in front of the school to tell the school about Mary's Meals. The child had some activities where they were learning about SS Peter and Paul. During the afternoon each year group came outside to play games led by the Mini Vinnies.

The second focus that we decided on was to support refugees. This is because we had been affected by the situation in Ukraine.

Firstly we considered what we knew about refugees and also any questions that we had.
Then we thought about different fund raising activities throughout Lent.
We researched about different refugee charities and decided to focus on "Stories of hope and home."
We organised the following fund raising activities.
Own clothes day
Crazy hair day
Wearing red clothes day
Tip top sale after school
The children did so well with all of the activities.

Then we had to count the money to see how much we had raised. 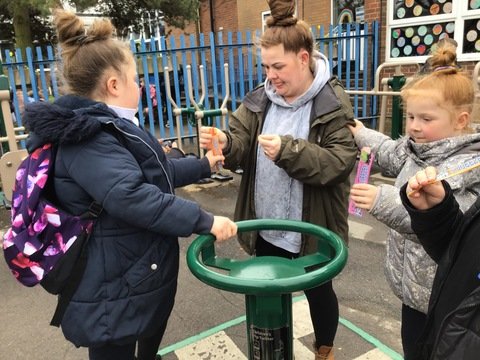 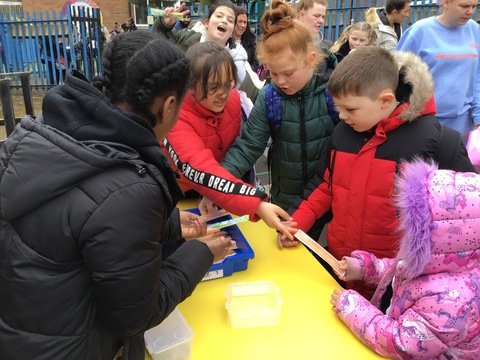 The children decided that they would like to focus on helping the homeless.

Firstly the children considered what people who are homeless needed. We thought that during the colder months it would be good to consider helping them with warmer clothes such as hats, scarves and gloves.
Next we thought about how we could help them. In groups the children presented their ideas. We voted on the idea and decided to ask each class to donate a different item of clothing in.
Then we made posters for each class and presented to each class what we wanted them to do.
When the donations started coming in we sorted them into packs and made cards to put into the packs.
On the 1st December Miss Foster and Mrs Sharpling went into Birmingham City Centre to hand out the packs to people.
Finally we told the Mini Vinnies about who we met. We made a powerpoint (below) for each class to see.

Pupil voice -
Anna "I am happy that we helped the homeless."
Riley "I enjoyed making the difference."
Miss Foster "The people that we spoke to in Birmingham were very happy with what we gave them. They loved the cards made by the children."